Barbara’s story deserves a bigger platform and more exposure. More young business and government leaders should know what their world was like in the past and appreciate that a lot of pioneering work was undertaken to create an environment where women can and do seek a range of opportunities and senior leadership positions.– Sara Eisen, CNBC

Published by Penn State University Libraries, the March 2020 re-issue of A Matter of Simple Justice  includes an updated cover and a foreword by Sara Eisen, CNBC correspondent and Co-Anchor of “Squawk on the Street” and “Closing Bell”.
This new printing commemorates both Women’s History Month and the 100th anniversary of the passage of the 19th Amendement, which guarantees and protects a women’s constitutional right to vote.

Purchase via PSU Press
or on Amazon.com In August 1972, Newsweek proclaimed that “the person in Washington who has done the most for the women’s movement may be Richard Nixon.” Today opinions of the Nixon Administration are strongly colored by foreign policy successes and the Watergate debacle while its accomplishments in advancing the role of women in government have been overlooked. A Matter of Simple Justice shines light on the administration’s groundbreaking efforts to expand the role of women and the long-term effects for women in the American workplace.The book focuses on Barbara Hackman Franklin, a Staff Assistant to the President who was hired to recruit more women into the upper levels of the federal government. Franklin, at the direction of President Nixon, White House Counselor Robert Finch, and personnel director Fred Malek, helped to bring more than one hundred women into executive positions in the government—almost four times more than in any previous administration.

In the second part of the book, archivist and historian Lee Stout highlights the personal stories of other women who were swimming against the tide to achieve equality. Based on the “A Few Good Women” oral history project at Penn State University Libraries, the book features excerpts from interviews with prominent women and men who describe their experiences during “The Gender Revolution.” Interviewees share fascinating details about early influences, breaking down barriers, the impact on family, the role of networking, and the particular challenge of gaining entry to the legal profession.

Although largely unknown or forgotten today, the story of Barbara Franklin and a few good women shaped the opportunities available to women for generations to come.

Lee Stout is Librarian Emeritus at the Penn State University Libraries. He served as University Archivist for 28 years and retired in 2009. Stout is past-president of the Society of American Archivists and served on the U.S. National Historical Publications and Records Commission. 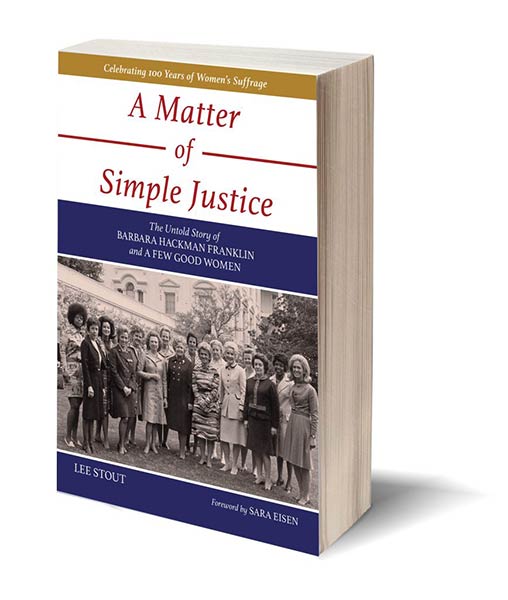